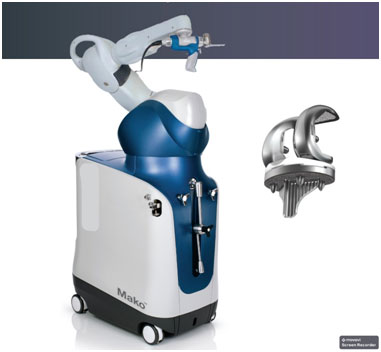 MAKO robotic arm assisted hip and knee replacement surgery is cutting edge technology that provides each patient with a personalised surgical plan based on each individual patient’s unique anatomy. It was developed initially in the United States and was first introduced in Australia in 2017. It was the first robot that was introduced in the orthopaedic surgical field and has almost 15 years of scientific data behind it, proving its efficacy and safety.

Prior to surgery a CT scan is obtainedof the patient’s arthritic knee and is used to generate a 3D virtual model. This virtual model is then loaded into the MAKOcomputer software. Dr Kalanie is then able to create a personalised virtual total knee replacement on the 3D CT images before the actual operation. This is an incredibly powerful tool as the surgeon can enter the operating theatre having a deep knowledge of the patient’s anatomy, deformity, alignment, prosthetic size and positioning allbefore any real cuts are made on the patient. Having this knowledge greatly improves the flow, accuracyand safety of the surgery.

In the operating theatre, after gaining access to the knee, I insert special trackers/sensors into the Tibia (shin bone) and the Femur (thigh bone). These sensors relay information and communicate closely with the robot. Next, the centre of the hip joint and the ankle joint are recorded by the sensors and the computer to allow measurements of the lower limb alignment to be calculated. This is then followed by mapping the surface anatomy of the knee joint using a specialised probe.

Figure 1: Special probe with sensors is used to map out the surface anatomy of the distal femur

The robot is then able to match and marry this surface anatomy with the patient’s pre-operative CT scan(Fig 2), accurately identifying and recognising the orientation and dimensions of the knee. Once the robot is aware of the bony anatomy, the next crucial part of the puzzle is the soft tissue tension around the knee.

The two key stabilising ligaments of the knee are the Medial and the Lateral Collateral Ligaments (MCL/LCL, fig 3). Achieving symmetrical and equal tensionin these ligaments through the full range of motion of the knee is crucial for satisfactory functional outcome following a TKR. 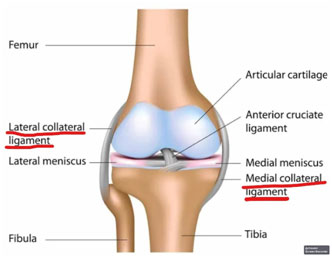 One way we achieve equal tension in the ligaments is to create a “rectangular space” between the two bony ends with equal sides in both flexion and extension (fig 4). This is the concept of creating “equal gaps”. A knee with equal gaps is said to be ligamentously “balanced” 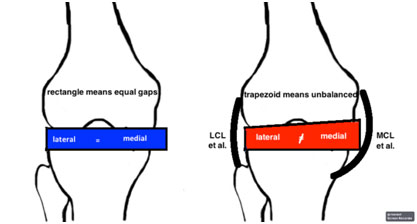 Figure 4: A TKR with optimum function has a rectangular space between the bony ends in both flexion and extension. Such a knee is said to be well “balanced”

One of the crucial roles of the robot is to provide me with dynamic data regarding the medial and lateral gaps of the knee. I do this by stressing the MCL and LCL in both extension and flexion before making any cuts (fig 5-9). The robot is then able to marry the data regarding the bony anatomy and the soft tissue tension/ligament balance. I am then able to further adjust the bony virtual plan and slightly tweak the implants orientation and depth of cuts many times over until I am happy that I have achievedthe perfect ligament tension/symmetry in both extension and flexion.This attention and respect to both the bony anatomy and the ligament tensionprovides the patient with the best chance of having a more physiologic and natural feeling prosthetic knee. 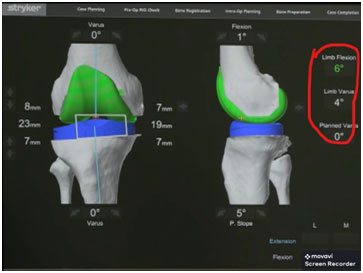 Figure 5: The anatomy and alignment of the knee joint and the planned prostheses before any cuts are made. As can be seen here this patient has 6 deg of fixed flexion deformity and a limb alignment of 4 deg Varus. 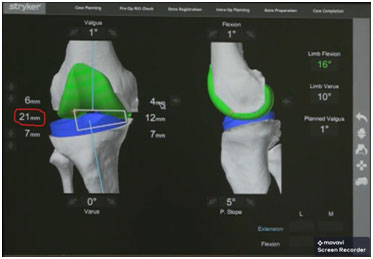 Figure 6: Here I stress the LCL with knee in extension. The distance between the prostheses (which is the product of ligament tension) is 21mm on the lateral side of the knee. 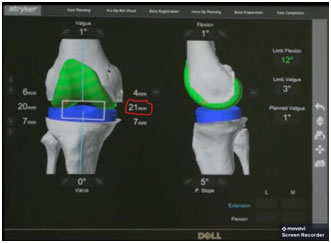 Figure 7: The MCL is being stressed with knee in extension. I am aiming to achieve 21mm of gap, which is what I achieved on the lateral side in fig 6. 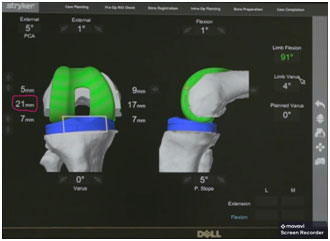 Figure 8: I now stress the LCL in flexion, aiming to achieve 21mm gap +/-1mm. As can be seen the lateral gap in flexion is exactly as planned at 21mm. 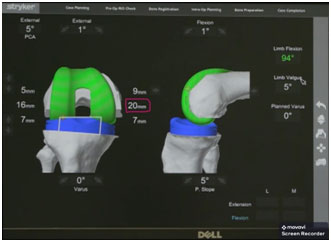 Figure 9: The MCL is then stressed in flexion, once again aiming for 21mm +/-1mm. 20mm is achieved, which means an equal rectangular space in both flexion and extension, an ideal scenario for a well-functioning TKR.

The final plans are checked one final time (fig 10) to ensure perfect fit and once I am happy the MAKO Robotic arm is brought in to start the bony cuts as per the virtual plan.

Figure 10: After providing the computer with information regarding the patient’s surface bony anatomy and ligament tension information, the final plan is checked and fine-tuned. Once I am happy with all the parameters the robot is brought to perform the bony cuts as planned.

The robotic arm is then brought in and bony cuts are performed. The robot is excellent at limiting the bone preparation to the diseased areas only whilst preserving the surrounding soft tissues. Throughout the process I still have full control over the saw, guide it and monitor the cuts closely on the robotic unit’s screen (as seen in fig 11a and 11b).

Figure 11a: Robotic arm cutting the bone with high degree of precision as per virtual 3D plan without damage to the surrounding soft tissues.

Figure 11b: Throughout the cutting process the surgeon is still in full command of the robotic arm and closely monitor the progression of the cuts on the robotic unit’s screen.

Once the cuts have been completed successfully, trial components are impacted in place and a trial polyethylene liner is inserted. I then check that the knee can be brough out into full extension (“limb flexion” on the screen should read “0” as seen in figure 12) and check the overall alignment of the limb and make surethat it matches what was originally planned (“Limb Valgus” and “Planned Valgus” are both 1deg as seen in fig 12).

Figure 12: As can be seen, with trial components in place, the limb achieves full extension (Limb flexion 0deg), and the post-operative limb alignment is exactly as planned, at 1 deg of Valgus. Also note the equal joint gaps on both medial and lateral sides of the joint with the knee in resting position.

The medial and lateral ligaments of the joint are stressed once again, this time with the prosthetic trial components in place, in both extension and flexion, and the gaps are recorded one more time.Generally, I aim for a lateral gap that is 1-2mm greater than the medial side, as this has been shown to be associated with higher post-operative functional scores and patient satisfaction. Therefore, as can be seen in figs 13 and 14, once again perfectly symmetrical gaps have been achieved, with 21mm joint gap on the medial side in both flexion and extension, and 22mm on the lateral side, confirming a well-balanced and optimally functioning prosthesis. 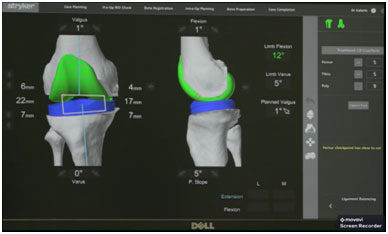 Figure 13: The knee is stressed in extension to assess the tension of medial and lateral ligaments and to ensure perfect balance and symmetry. 21mm gap is achieved medially and 22mm laterally, which is ideal. 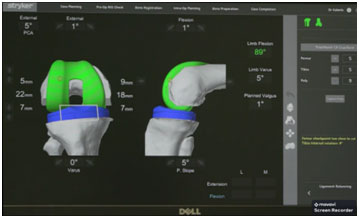 Figure 14: Knee stressed in flexion, 21mm achieved medially and 22 laterally, again which is ideal for a well-functioningprosthetic knee.

Since the robotic bony cuts are so accurate,it is now possible for me to use uncemented prostheses with a high level of confidence (fig 15). Until now, TKRshave been fixed with cement. However, cement is one of the components that eventually loosens over time and contributes to failure of the implant. In the hip, we have been using uncemented technology for years with excellent results, however; we have been reluctant to do the same in the knee as the implants, until now, didn’t fit the bony surfaces firmly due to high level of error when cutting bones with one’s hands. However, with the advent of robotics which allows for much better fit of the implants and direct 3D printing of Titanium matrix onto the surfaces of the prostheses, uncemented implants can now be used with a high level confidence and excellent fixation. I have no doubt this will lead to longer survivorship of these implants and lower revision rates, specially in the young active patient cohort. Overall robotics has a number of advantages over the other currently used methods. Althoughnon-robotic systemssuch as computer navigation or patient specific guides, allow for more accurate bony cuts compared to instrumented technique, they do not provide the surgeon with any knowledge regarding the soft tissue tension of the knee. The assessment of ligament tension is based purely on the subjective assessment of how the knee “feels” to the surgeon’s hands with no objective measurable data. The robot’s ability to reproducibly and consistently provide the surgeon and patient with highly accurate bony cuts (based on a 3D virtual plan) with precise information regarding each patient’s specific ligament tension is one of the many reasons that I see it as anindispensable tool.

The robot is also less likely to cause unintended damage to surrounding important ligaments and tendons. This is one of the factors behind the improved functional outcomes and reduce pain reported by patients following MAKO compared to othermethods of TKR (fig 16). 20-25% of patients following TKR currently are unsatisfied with the outcome of their surgery and I very much suspect that this due to the fact that in majority of the cases the bony cuts and ligament balancingare performed the same way in everypatientsirrespective of their specific individual anatomic bony and ligament deformities. It is assumed (wrongly!) that we are all made the same, and that the same “cookbook” technique will work on all of us, which is obviously not true.I believe this is why not an insignificant portion of patients end up with a knee that doesn’t suit them, leading to poor function and patient dissatisfaction. The MAKO’s ability to provide the surgeon with crucial information inreal time regarding each individual patient’s specific bony and ligament deformity is the key feature that leads to improved outcomes. (fig 17)

Figure 17: Forgotten Joint Score is out of 100 and is the measure of joint function and awareness. The higher the score the more satisfied the patient. Patients who have undergone traditional TKR have average score of 49. Following MAKO TKR the average score climbs to 65. 83% of patients reported their knee feeling like a “natural joint” or an artificial joint with minimal or no restrictions. Interestingly patients who have had MAKO Total Knee Arthroplasty are also less likely to be readmitted back to hospital in the first 3 months following their surgery compared to instrumented methods as seen in figure 19. Figure 19: Readmission rates to hospital at 30, 60 and 90 days after Manual Total Knee Arthroplasty (MTKA) and Robotic Assisted Total Knee Arthroplasty (RATKA). As can be seen the more traditional knee replacement methods have higher chance of being readmitted to hospital for various problems and complications in the first 3 months following surgery compared to the Robotic group.

Overall it has been shown that 99% of knees can be balanced to within 1mm in both flexion and extension, without need for soft tissue release with resultant improved in knee range of motion, earlier discharge, less pain and improved post-operative functional scores. Patients who have had MAKO TKR tend to report that their knee feels more natural and generally forget that they have had an artificial knee compared to those knees performed using other methods.

patient 5 weeks following bilateral MAKO total knee replacement, has already achieved full range of motion, is off all pain medication and ready to return to work as a teacher